Which Is Better FSC or A Level? Get The Correct Answer

Home/Blog/Which Is Better FSC or A Level? Get The Correct Answer
Previous Next

Which Is Better FSC or A Level? Get The Correct Answer

Students looking for professional studies have started prioritizing the Board of Intermediate and Secondary Education (BISE) system and have started going for Matric and Intermediate instead of General Certificate of Education (GCE), O and A-levels/AS levels.
Numerous families, especially of doctors and engineers, are forcing their kids to follow the local Pakistani educational system as it is considered that the course taught in engineering and medical colleges and the entry tests are based on the BISE’s course. They are of the opinion that GCE was meant for those who planned to study abroad.

A few teachers and parents asserted that this British educational framework was running a ‘global plan’; so as to infuse their own course, and a large number of students burn through billions of rupees abroad to appear in the tests. It was also ending up being a financial weight on the monetarily more vulnerable nation having a weak economy.

Parents say that the entry tests course is also not based on the GCE system. Students, who did O and A levels in engineering from different School Systems, told that doing O and A-levels was their biggest mistake. They said that their fellows who went for F.Sc. were more easily getting admitted to engineering universities as compared to them. They said he some of them gave engineering tests continuously for two years but still were not able to get admission even though they attained 3 A grades in A-levels. According to them, more than 90 percent of questions in the entry tests were generated from local books and Pakistani courses. GCE has become a status symbol and not even India followed this system, to ensure a uniform educational system in the country.

A level or FSC For Higher Studies

Let’s have a look over it from a neutral perspective, it bodes well for an understudy who has done O’ levels to normally decide on A’ Levels. Whereas, it isn’t so basic. Many people contend over the thing that FSc. is a much less expensive and better alternative for those wishing to remain and seek higher education in Pakistan. Why put such a great amount in a foreign degree when everybody is, in the end, going to end up and study in similar colleges and universities? In addition, the Selection criteria for most Pakistani colleges and universities depend on the FSc. merit framework. The strongest contention right now over the issue of a profession in medication or engineering in Pakistan. MCAT and ECAT are significantly based on FSc. Schedule and students originating from A’ Levels regularly don’t get to score up to the merit. 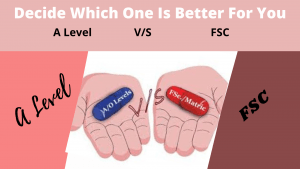 Due to all such reasons, many people simply feel that greater financial investment in A’ levels is simply a waste of money and not worth it. Whereas, if we look at it from a broader perspective A Levels is actually a much better course option for a lot of reasons.

A Level a Better Option

Regardless of the thing that whether you stay in Pakistan for higher education or go abroad for studies, A-Levels does mentally prepare a student with better grooming and understanding, which is well justified, despite all the trouble. FSc. is actually repetition based studies and the extent of the books is limited and narrow. Students doing their A levels are instructed to thoroughly consider the case and this grows many better-thinking abilities in them providing them a better perception and sense of understanding.

Additionally, the faith that students from A levels don’t get into medical colleges and universities is a pretty fantasy after considering the fact that engineering and medical universities have an enormous number of admitted students with a foundation in A level, particularly NUST and Aga Khan Medical University.

For those students who wish to consider abroad for higher studies, A levels practically are the best and choice for them. Not exclusively is an A levels degree acknowledged by the colleges there yet it additionally empowers students to score much higher in SAT.

A levels have a lot higher scope of courses to opt which are likewise increasingly significant to the great number of fields available. Then again, FSc. has obligatory courses like Urdu, English, Pakistan Studies and Islamiyat which are insignificant to numerous professional fields.

So if you are A levels student of having done A levels in the past, you don’t have to be worried about such things. You have made the right choice for yourself.